Below are details of the process of photopolymerisation which is widely used in stereolithography.

This method of rapid prototyping uses the properties of certain resins which have the ability to cure under the effect of light or heat. They are then called photosensitive resins. These resins are cured layer by layer depending on the file entered on the computer to obtain the object to be manufactured. 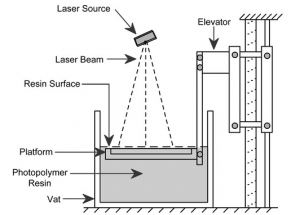 The stereolithography machine is equipped with a tank containing the liquid epoxy resin. A mobile platform is immersed in it and supports the object being manufactured. The platform is positioned at a certain depth below the level of the resin, thus determining the thickness of each layer. The machine is also equipped with an ultraviolet laser beam, which has the property of curing photosensitive resins, by means of successive layers with a thickness of 0.10 to 0.15 millimeters.

The fixed laser is accompanied by a beam control device, and both are located above the platform. The direction control of the laser is possible using very precise and flat mirrors called the deflectors. This device allows the laser to be directed onto any point of the platform.

The main stages of photopolymerisation

The different layers making up the object are processed one by one: first, the ultraviolet beam scans the surface of the resin located in the vat at locations defined by the computer file. Under the effect of UV, the resin is transformed into a solid polymer. Then the platform has lowered a notch and the still liquid resin then covers the previously solidified part on its entire surface. Then the laser polymerizes the second layer, and so on.

Once completed, the object is removed from the tank and the uncured resin is dissolved with a solvent. Depending on the resins used, baking of the object at the end of the process is necessary to complete the curing.