Rapid prototyping technologies, such as 3D printing and 3D machining, are useful for validating visual and mechanical concepts. Once this stage of prototyping is complete, it’s necessary to move on to a new stage with a pre-industrialization or industrialization phase in order to implement a project. The requirements may vary, from ten to several hundred parts, depending on the case. This is called a small series, pre-series or micro-series depending on the number of parts. Two technologies make it possible to produce parts in small series with relevant manufacturing times and costs. These technologies are thermoplastic injection and silicone molding.

The thermoplastic injection molding process, also called thermoplastic molding, uses an aluminum or steel mold to design the parts. After the production of the industrial mold, this technique allows the production of small series of several thousand plastic parts. The molds for this type of production are then economically optimized to reduce costs: use of aluminum for the impressions, common or interchangeable carcass, etc. 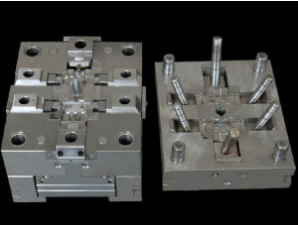 Photo of an aluminium mould

Silicone molding for the production of small series of plastic parts

In general, silicone molding technology is used in rapid prototyping after 3D prototyping and 3D plastic machining. It is used to produce a small series of plastic parts, because silicone molds, also known as prototype molds, make it possible to obtain parts usable “as is” in a short period of time. In fact, the parts produced with this technology have visual and functional properties that are very similar to those of injected parts.

Photo of a small series of functional plastic parts

Here is an example of a production of a small series of functional parts. Our workshop has made a set of 200 copies of these parts. We used material UR2180.

In addition, the manufacturing of silicone molds has the advantage of limiting investment in tooling. They allow the duplication of several dozen prototypes from a master part. 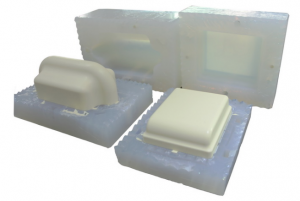 Our workshop is able to produce plastic parts in small quantities. We are able to prototype visual and functional parts. If you require small series of plastic parts, send us your request via our quotation page.